The World of Wellness 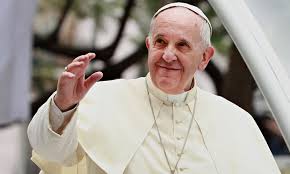 On June 18, 2015, Pope Francis' 184-page long Encyclical Letter was published, in which he calls for the transformation of lifestyles, politics, agriculture, economics, and business in general to tackle environmental degradation.

"The violence present in our hearts is also reflected in the symptoms of sickness evident in the soil, in the water, in the air and in all forms of life," he says.

The expansion of these [genetically engineered] crops has the effect of destroying the complex network of ecosystems, diminishing the diversity of production and affecting region­al economies, now and in the future.
In various countries, we see an expansion of oligopolies for the production of cereals and other products needed for their cultivation. This dependency would be aggravated were the production of in­fertile seeds to be considered; the effect would be to force farmers to purchase them from larger producers.
Certainly, these issues require constant at­tention and a concern for their ethical implica­tions. A broad, responsible scientific and social debate needs to take place, one capable of con­sidering all the available information and of call­ing things by their name.
Discussions are needed in which all those directly or indirectly affected (farmers, consumers, civil authorities, scientists, seed producers, people living near fumigated fields, and others) can make known their problems and concerns, and have access to adequate and reliable infor­mation in order to make decisions for the com­mon good, present and future.
This is a complex environmental issue; it calls for a comprehensive approach which would require, at the very least, greater efforts to finance various lines of inde­pendent, interdisciplinary research capable of shedding new light on the problem."

Comments are closed, but trackbacks and pingbacks are open.

By Dr. Mercola The fact that your body is replete with cannabinoid receptors, key...

The `Dirty Dozen` Foods to Avoid

by Dr. Weil Eating fresh produce is the best way to obtain the nutrients that support...

What is the genetic capacity for humans to live? What is the average age? Why is...